Thinking of the United States

I have resisted thinking about United States politics during the past three months, keeping in mind that we have our own political problems in Canada. But today is the day Americans have their election and I have many American friends, including friends who are doctors, and they are worried.

Every one of my American friends is worried about how much hate there is in the United States, even as they work to keep this hate out of their own lives.

On Sunday at a rally, Republican supporters could be heard yelling, “Fire Dr. Fauci!”

All Dr. Fauci has done is provide the best advice to the government of the day, just as he has done for past administrations. I am certain that other administrations have been unhappy with his advice, but there was never a suggestion that he should lose his job – until this administration.

At this moment in history, I am glad not to be a doctor in the United States. My American doctor friends have worked steadfastly through the pandemic, some of them in hellish situations in regions with unrelenting rates of COVID-19 infection. Some have seen their practices and their lives changed forever in six months. There have been 230,000 deaths and 9.34 million people infected. Many more people than this have suffered because of the pandemic. The doctors I know are tired and discouraged.

The American doctors I know are worried about what will happen if patients lose access to healthcare coverage. One friend estimated that twice as many people would have died if the Affordable Care Act had not been in place. Another, in a different corner of the United States, used the term “genocide”, telling me that the illness and deaths they were seeing were disproportionately among marginalized groups.

As much as doctors become doctors to care for others, to care for those who are ill and help them stay well or assist them through their deaths, American doctors have faced a particularly difficult challenge during the pandemic. Worse, some have even had to be worried about being fired for doing a good job.

Today, as much as I would like not to worry, I cannot help it. Neighbours and friends are hurting, set against each other, not able to listen to each other or solve their greatest problems. What happens in America always affects Canada.

I am going to include with this message today, a picture that reminds me of how close Americans and Canadians are. This is an image from a small border town, with citizens of both countries living across the street from each other. It is a good reminder of the reason that an election in the United States is very much on Canadian minds. 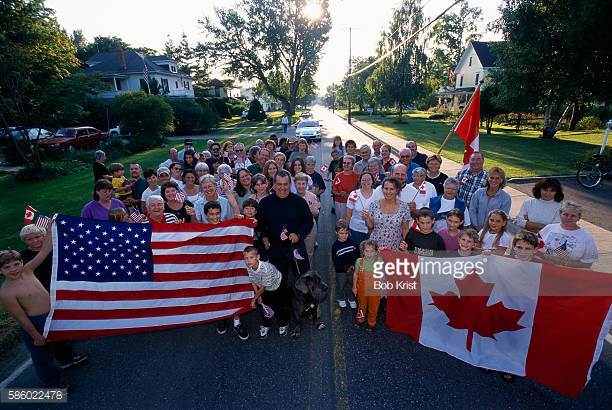 (Note: Photography credit is embedded in the photo.)